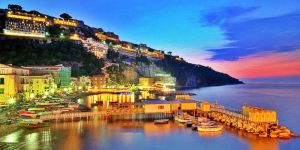 The foundation is traditionally and legendarily attributed to the ancient Greeks, but Sorrento had as its first settled inhabitants the Italic peoples, starting from the Etruscans and then, from 420 a.C., the influence of the Osci was important. In Roman times, Sorrento is remembered for having participated in the Italic insurrection (90 BC); a colony was then deduced from Silla, which was later followed by a settlement of Octavian veterans. It was then the municipality of the Menenia tribe. It was a bishop’s seat at least from 420. During the crisis of Byzantine dominion in Italy, the town acquired autonomy as a duchy, first under the supremacy of the Dukes of Naples, then with its own archons and dukes, always in struggle with Amalfi, Salerno and the Saracens. The history of Sorrento is confused with that of the other cities of Campania; took part in anti-Muslim leagues; fought the Longobards of Benevento; he knew family struggles among the local nobles. Obliged in the IX century by Guaimario to accept as his duke his brother, Guido, the Duchy of Sorrento resumed his autonomy after the death of the latter and then finally lost it in 1137, absorbed in the new kingdom of the Normans. Sorrento then followed the fate of the kingdom, not without rebellions and conflicts, especially at the beginning of the Aragonese age. June 13, 1558 was taken and plundered by the Turks; in the winter of 1648 the city valiantly supported the siege of Giovanni Grillo, general of the Duke of Guise.

Church of the Carmine
The historic center still shows the orthogonal layout of the streets of Roman origin with thistles and decumans, while upstream is surrounded by the sixteenth-century walls. There is the cathedral, rebuilt in the fifteenth century, with a neo-Gothic facade, and the church of San Francesco d’Assisi, with a remarkable fourteenth-century cloister, with arched arabesque portico intertwined on octagonal pillars. The Correale di Terranova museum displays collections of Greek and Roman artefacts and Capodimonte porcelains, with a section dedicated to 17th-19th century painting; from the park you can also enjoy a magnificent view of the gulf. At Punta del Capo, 3 km west, are found Roman remains of the villa of Pollio Felice (1st century AD). Another maritime villa is the “villa of Agrippa Postumo”, built by the unfortunate nephew of Augustus.

Churches and convents
Cathedral of Saints Philip and James: monumental church dating back to the tenth century, cathedral of the Archdiocese of Sorrento-Castellammare di Stabia and parish seat;
Basilica di Sant’Antonino: monumental basilica dating back to the eleventh century; inside there are the remains of the patron saint of the city, Saint Anthony;
Church of Saints Felice and Baccolo: monumental church also known as the Church of the Rosary, located in the historic center and cathedral of the city for several centuries;
Church of San Paolo: monumental church of the historic center; attached to it is also the homonymous monastery of the Benedictines, later transformed into a school;
Sanctuary of the Madonna del Carmine: monumental church of the historic center; built in the III century it was rebuilt in the XVI century;
Convent of Santa Maria della Sapienza. One of the reasons why it is famous for having given its name to the “wisdom”, sweets created by the Clarisse nuns, typical of the Christmas period, similar to the susamielli, which are part of the Neapolitan culinary tradition.

Palaces and villas
Proceeding towards the resort of Capo di Sorrento, on the Corso Italia there is the Villa Fiorentino left as a legacy by the Florentine-Cuomo spouses to the city of Sorrento. The construction was completed in 1936 and extends from the ancient walls to the Corso Italia. It is used for exhibitions, concerts and other public events while the garden is used as a playground.

View of the Gulf of Naples and Vesuvius from Villa Silvana
In the center of Sorrento, a few steps from Piazza Tasso, stands Villa Silvana, an elegant Art Nouveau dwelling from the early twentieth century, with a terrace from which you can see the gulf. The villa is surrounded by exotic vegetation (palm trees, cycas, camellias, banksiae roses, yucca, agave, aloe, and succulents). The descent to the sea is possible by means of a long series of steps, interspersed with panoramic terraces surrounded by lemon trees, pines, vines and figs.