Pompei rises on a volcanic plateau, on the southern side of Vesuvius, about 30 meters above sea level and a short distance from the mouth of the river Sarno, in an evocative position, praised in Roman times also by Seneca. The lack of springs or streams on the plateau prevented its population in the most remote epochs, even if during the VIII century a. C. in the nearby valley of the Sarno some settlements were formed, as evidenced by numerous pit graves. 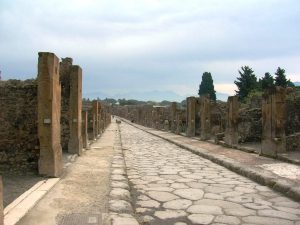 The fortune of the city was from the beginning linked to its position on the sea, which made it the port of the centers of the hinterland of Campania, in competition with the Greek cities of the coast. Of course the Oscan Pompeii could not escape the Greek influence, which extended in the Gulf of Naples to the Sorrento peninsula, including the islands of Capri and Ischia. The Greek hegemony on the Campania coast was however soon threatened by the overpowering advance of a new, formidable power: that of the Etruscans, which also conquered Pompeii, dates back to that time the Temple of Apollo and the Stabian Baths.

At the same time, however, he had to start a slow but unstoppable descent of the Samnite populations coming from the mountain areas, conquering during the 5th century BC. all of Campania, with the exception of Neapolis and unified it under their rule.
Pompeii had to undergo significant urban and architectural transformations, in which the Samnites could not do without the Greek influence. Finally, in the 2nd century BC with the domination of Rome on the Mediterranean that facilitated the circulation of goods, the city experienced a period of great economic growth, above all through the production and export of wine and oil.
This state of well-being is reflected in a noteworthy development of public and private buildings: the Temple of Jupiter and the Basilica in the Forum area were made at this time, while on a private level a stately home like the Casa del Fauno competes for the greatness and magnificence. The economic situation remained flourishing for a long time and new important public buildings were created, such as the Amphitheater and the Odeon. 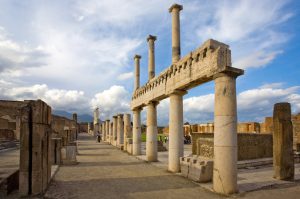 Pompeii spread over almost 64 hectares and its population was about 20,000.
The planimetry of the city from geometric regularity was basically derived from the Greek architect and urban planner Ippodamo di Mileto. But the plan of Pompeii does not conform to the rigid arrangement according to right angles, and the blocks do not have constant dimensions that distinguished, in general, the works of Hippodamus. However, despite the lack of accuracy, Pompeii is the first example of systematic urban planning in Italy. Architects, designers and builders had their happiest moment in the time of Nero, as a result of the earthquake of 62 AD. In fact, during the last seventeen years of the life of the city they were called, not only to expand the area of ​​Pompeii, but also to rebuild the many buildings that the earthquake had destroyed or damaged. However, this took a long time and the builders did not complete their work; the grandiose projects for the reconstruction of public buildings in many cases were not even started when the Vesuvian eruption of 79 AD. they caused total cancellation.